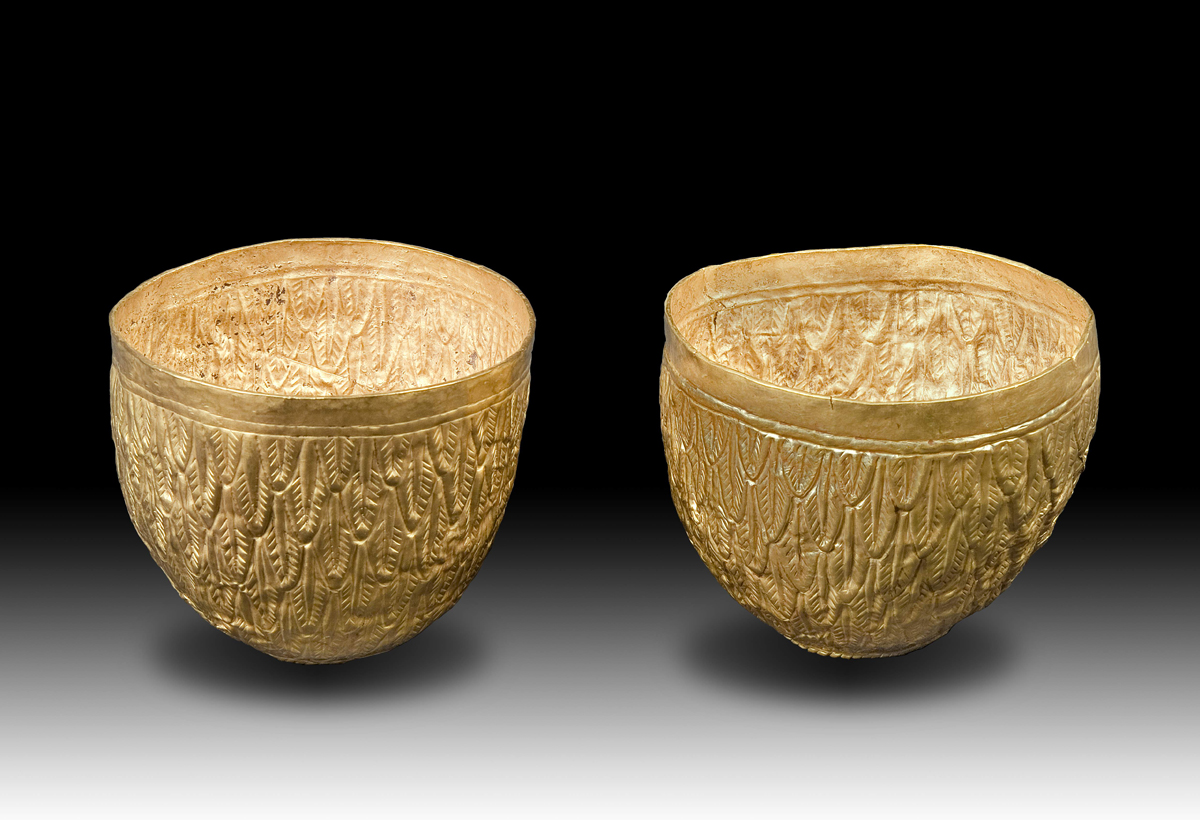 The bodies of both of these two hollow, cup-shaped objects are decorated with five overlapping rows of feather pattern with undecorated bands around the open ends. The closed end of each piece is finished with a band in relief, diagonally engraved with oblique notches to resemble a rope. These encircle rosettes – one with eight petals and the other with twenty-four overlapping petals. Holes have been pierced from the outside in the centre of the rosettes. These pieces were found crushed, perhaps the result of ritual destruction; they have now been restored to their original shape.

The closest parallels in shape and to certain extent in decoration for these two pieces are the objects from Kurdzhips barrow in the Kuban basin, and from Perederieva Mogila in the Ukraine. The first is almost the same size as our objects; the second is much larger. Both have figural decoration and are more conical than our objects, but they also have rounded ends decorated with rosettes around the central holes.

All these pieces belong to a group of the so-called conical objects, cones or caps, which are generally hollow with one sealed end which has been pierced. These objects are found in Scythian burials, hoards and treasures of the second half of the 6th to the 4th centuries BC. They vary in shape, proportion and dimension; the largest known is c. 16 cm high, but most are much smaller. Their function is still a matter of debate amongst academic researchers. They are sometimes described as tassel-holders, which would have hung from a horse’s neck, or as quiver ornaments. However it is clear that the objects in this group have various functions and that the largest of them are unlikely to have been used as either tassel holders or quiver ornaments.

The surface of both of our objects is almost completely covered with feather-patterned decoration, a motif widely used in Greek metalworking, especially in the 4th century BC and in the Hellenistic period. Rosettes with eight petals with rounded ends were a typical decoration for the bottom of precious metal vessels found in Scythian barrows of the middle to the third quarter of the 4th century BC. Rosettes with petals divided by arrow-shaped projections, as on one of our objects, appear on the bottom of a silver goblet from the Scythian barrow near Voronezh, dating to the first half of the 4th century BC. The decoration in the form of a rosette composed of twenty-four petals on the second object is significantly rarer on the metalworking from the northern Pontic region; however it decorates the bottom of the silver-gilt goblet with two sphinxes from the royal Solokha barrow, dated to the late fifth or early fourth century BC.

The conical object from Perederieva Mogila is dated to the third quarter of the 4th century BC and the Kurdzhips barrow to the late 4th century BC. It is evident that the objects discussed also belong approximately to the same period. We may tentatively date their manufacture to the second half of the 4th century BC, and consider them as products of a northern Pontic (Bosporan?) workshop.

These are comparatively rare status objects, suggesting they originated from an aristocratic nomadic burial. As their decoration is completely Greek in style, they are a vivid demonstration of the syncretistic character of the culture of the North Pontic area in the early Hellenistic period.

The exact purpose of these gold cups was a matter of long-standing debate between the historians. However, during the most recent excavations that has been produced in the Stavropol' area, the traces of the drugs, such as opium and marijuana, were found inside some of the similar cups. This important discovery allows to presume the use of these cups for the drug-fueled Scythian rituals. Read more

The extraordinary planning, patience and precision needed to create a gold object from numerous separate components, as seen with the little horseman pendant (cat. no. 11), is matched by the equal degree of skill required to produce a three dimensional object from a single piece of gold. Just such a technique was used to produce both these objects. Each was made by hammering a single piece of gold into the form of a cone with remarkably even and thin walls - even the slightly flared rims are just 1.1 – 1.2 mm thick. The designs were then applied, from the outside, by means of a hammer with a variety of simple punches.

Trial testing on small samples of gold from both objects prior to any re-straightening using the recently developed measurement of the radioactive decay of the minute traces of uranium as typically present in native gold indicated they are of ancient manufacture. Interestingly, there was a significant difference in results from the samples from before and after restoration. This is due to the effects of the heat required to de-stress the gold prior to straightening.