Rhyton mount with griffins and a lion-headed spout 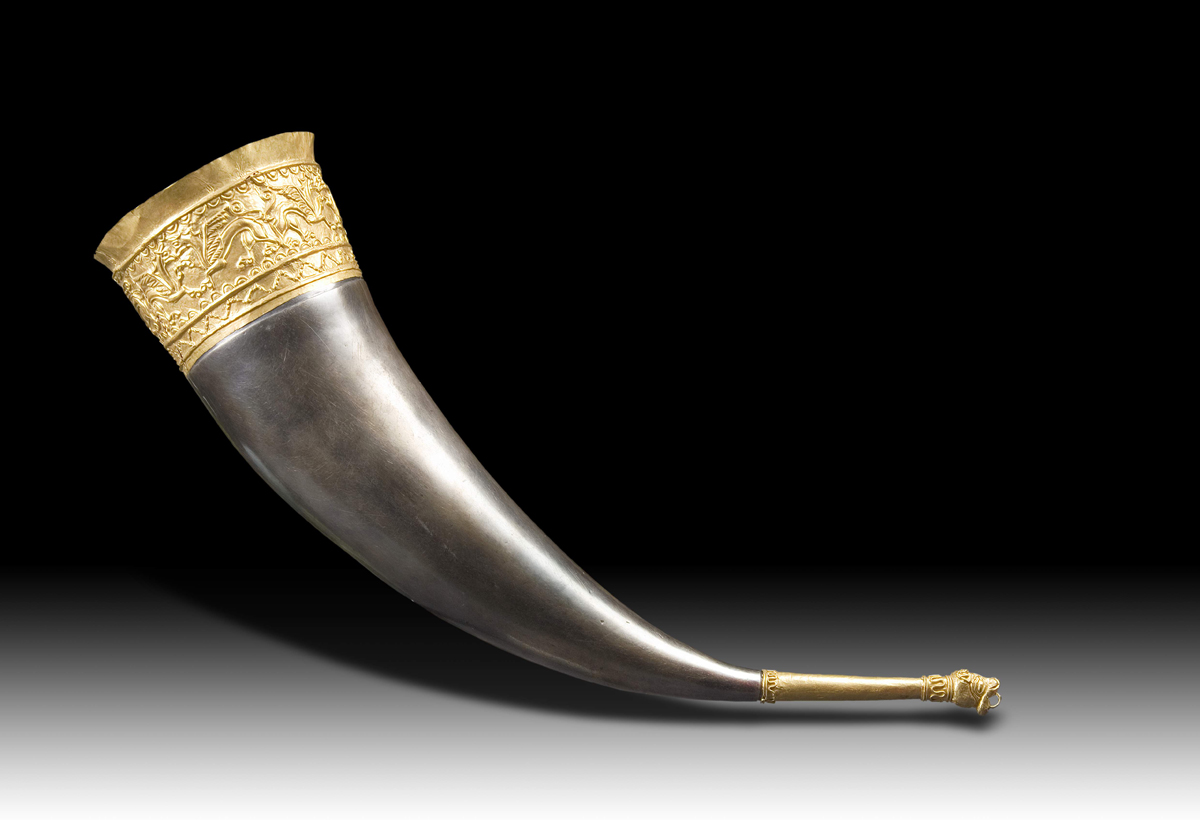 The reconstructed rhyton, with its modern restored metal liner, consists of the original gold mount from the mouth and a tube with a lion-headed terminal. The mount for the mouth has a flaring rim above a decorative frieze. It was originally wrapped around the horn of the rhyton with its ends overlapping. These are doubly pierced at the top, in the middle and at the bottom for fixings of thin gold strip. The repoussé ornament consists of a frieze flanked by two plain bands. The frieze is divided into two bands, the deeper one decorated with four pairs of confronted eagle-headed griffins flanked by ovae. Each has a raised front paw which touches the raised paw of the opposing griffin; the lower front paws also touch. The griffins are shown with raised heads, pricked ears and wavy manes. The bodies are delineated with a narrow raised contour which runs from the shoulder to encircle the haunch. The griffin frieze rests on a second narrow register which is filled by a running pelleted zig-zag.

The tube is a cylindrical sleeve, narrowing slightly towards the lion-headed terminal. The lion head was made in two halves, hammered in a matrix, which were then soldered together. It is primitively modelled with pricked ears lying back against the head above large, lidded oval eyes. The muzzle is flat with oblique slashes for nostrils. The mouth is shown wide open with a softly modelled lower jaw; it supports two fixings of curved gold wire. In contrast to the terminal the tube is made from a single sheet with a soldered seam; it is decorated at each end with filigree wire.

Rhyta made of real horn or silver with rim mounts made of thin gold sheet decorated in relief and spouts with animal-headed terminals are known from finds from Scythian and Maiotian burials of the North Pontic area, dated to the 4th century BC. In particular the mount decorating the mouth of the rhyton can be compared to the gold mounts of a rhytons from Kuban area dated to the 4 century BC. The rhyton of the presumably similar construction was found in the male burial of Karagodeuashkh barrow. Of this rhyton there are preserved a gold tube with the ram-head terminal, and, perhaps, also a gold overlay with the images of Pegasus from the both sides of the palmette. Another gold mount similar to the mount of our rhyton comes from stanitsa Vasyurinskaya, barrow no. 4/1976, decorated with a frieze in the form of stylised deer horns. Given the holes, pierced at the edges of the mount from Vasyurinskaya, it was fixed on the horn liner. On the mount of our rhyton there are no such holes; perhaps, this is an indirect proof, that is was mounted on the metal (silver?) core.

The construction and decoration of the lion-head terminals has prototypes amongst 5th century BC rhyta from the Kuban. The wires inserted in the mouth, forming arcs, are a feature, having parallel on the tube of the rhyton with a lion-head terminal, which is kept in the Museum of Krasnodar. Stylistically this lion head terminal of the rhyton derives from the terminals of the 5th century BC finds from the Kuban area: from Ulyap barrow no. 4 and the so-called “Maikop Find”.

The composition showing groups of antithetic griffins were widely used in the 4th century BC metalwork from the Scythian barrows. On the lower projection of the gorytus overlay from the secondary burial of Solokha barrow, dated to ca. 380 BC, there is such a scene with two horned lion-headed griffins; each of them has a lifted foreleg, whereas the left paw of the griffin, shown to the left, is put over the right paw of the griffin, shown to the right. It is also worth to mention such scene on a gold triangular plaque of the headdress from the female burial in the Karagodeuashkh barrow. Comparable compositions with griffins and sphinxes, opposing each other, with one paw, stretched forward, and another one – shown lifted, occur on the appliqués of kalathoi from the Scythian barrows of the third quarter of the 4th century BC, for instance, Chertomlyk, Тоlstaya Моgila, barrow no. 22 near the village of Vol’naya Ukraina in the Ukraine and barrow no. 8 of the Five Brothers barrows in the Lower Don area.

Although the lion-headed terminal of the rhyton shows clear reminiscent of the 5th century BC goldwork, our observations of the composition and style of the images on its mount suggest that the rhyton can be dated from the first half to the middle of the 4th century BC and was made in a workshop located in the Kuban region.

Griffin imagery was widespread in Graeco-Scythian art but this remarkable rhyton, executed in a workshop located in the Kuban region, is an exceptional example of a refined local interpretation of the creatures.

The assembly of this object from numerous separate components is typical of many classes of ancient goldwork. The head is made in two halves with a solder join across the top of the head, and around and under the muzzle. The terminal is a tapered sheet gold tube and the soldered seam is again clearly visible along its lower length. The join between the head and the tapered tube is disguised and decorated with a sheet gold collar with bands of wire, including a central serpentine band. Each wire is made from a narrow gold strip that has been twisted and rolled, and the spiral ‘seam lines’ resulting from this characteristic ancient process are visible even to the naked eye.

The upper section of the rhyton is of simple but interesting construction. It is made from a single piece of gold sheet, embossed with a paired animal design and then fastened into a closed tapered tubular neck. To form the join, the edges of the sheet gold were overlapped and then fastened using two very different techniques. There are small localised areas of solder and also places where a strip of sheet gold has been threaded through pairs of holes – in effect ‘stapling’ the edges together. Why two different joining methods were used is uncertain. However, making the joint waterproof never seems to have been the intention, suggesting that the object may not have been intended for use in life. The design embossed on the sheet gold is also overlapped where the edges join and this shows that the design was applied before the sheet was bent and joined. It is not impossible that the embossed sheet gold had served another function previously and was reused to form the rhyton top.

Trial testing on a small sample of gold from this rhyton section using the recently developed measurement of the radioactive decay of the minute traces of uranium as typically present in native gold indicated that is was of ancient manufacture.