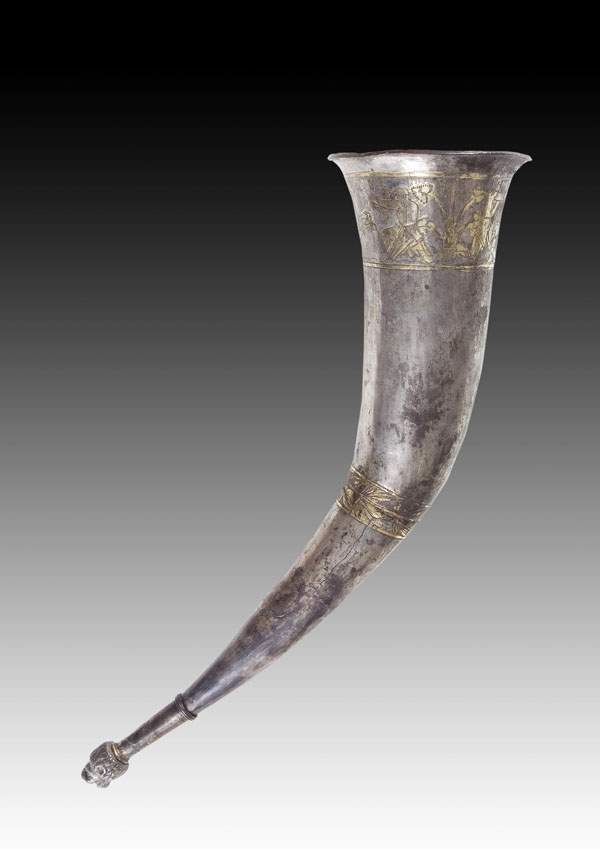 The composite rhyton is made up of a conical body of thick silver sheet, a tubular spout and a cast lion-headed terminal. The horn has a flaring lip and a smooth conical body which curves towards the spout at a slight angle. The join between the two is covered by a thick, triple-banded collar. The spout narrows towards the terminal and ends in a banded collar that rests against the back of the lion-headed terminal which is solid cast and realistically modelled. The horn is decorated with incised, pounced and gilded friezes at the rim and the median point of the body. The upper frieze is divided into two hunting scenes separated by stylised trees with heart-shaped leaves. One depicts an archer crouching with his right knee to the ground, with bow drawn, facing a leaping panther. The second shows an archer, a gorytos hanging from his waist belt, crouching back to back with the first, with left knee to the ground and bow drawn, also facing a leaping panther which stands back to back with the first panther. Median band, also incised and gilded, is decorated with pairs of laurel leaves springing from a raised central rib and contained within narrow raised borders.

Drinking horns or rhyta were ritual vessels which played an important ceremonial role in the cultures of different tribes in the Scythian world. This rhyton belongs to a small group dated to the middle or third quarter of the 4th century BC which is represented by finds from the Scythian barrows in the Ukraine and Don Basin. The decoration of the upper frieze, with twin hunting scenes of archers and panthers is generally unknown in Graeco-Scythian metalworking although a lion hunt with a mounted archer and a spearman appears on a silver-gilt two handled bowl from the Solokha barrow. The style of dress, hair and arms, however, finds a parallel in Graeco-Scythian metalwork. The closest stylistic parallel the for upper frieze – particularly with regard to the treatment of the leaves on the trees, the panthers and the ground-line – is the frieze on one of the rhyta from the royal barrow at Karagodeuashkh in the Kuban basin. The closest parallel, showing a hunting kneeling Scythian (hunting a hippocampus with a spear), is the scene engraved on the fragmentary preserved ivory plate, originally decorating a comb, found in one of the burials of the Scythian barrow Gaimanova Mogila in the Dnieper basin, dated to the middle or the third quarter of the 4th century BC.

The treatment of the hair locks of the manes, of the ears and the mouth of the lion-head terminal, are close in style and in details of elaborate lion-head terminals of the gold torques from the 4th century BC Scythian barrows аs well as lion-head-drain of the famous Chertomlyk amphora.

Though the question of local centres of manufacture of high status Graeco-Scythian metalwork is under discussion, it is possible to suggest that many items were manufactured in the Bosporan Kingdom, where this rhyton with its unique frieze may also have been made. The rhyton therefore not only represents a rare type found in 4th century BC Scythian and Maiotian tumuli, but is highly important for its unique hunting scenes, unknown in Graeco-Scythian metalwork.