Earrings in the form of crouched lions with pendants 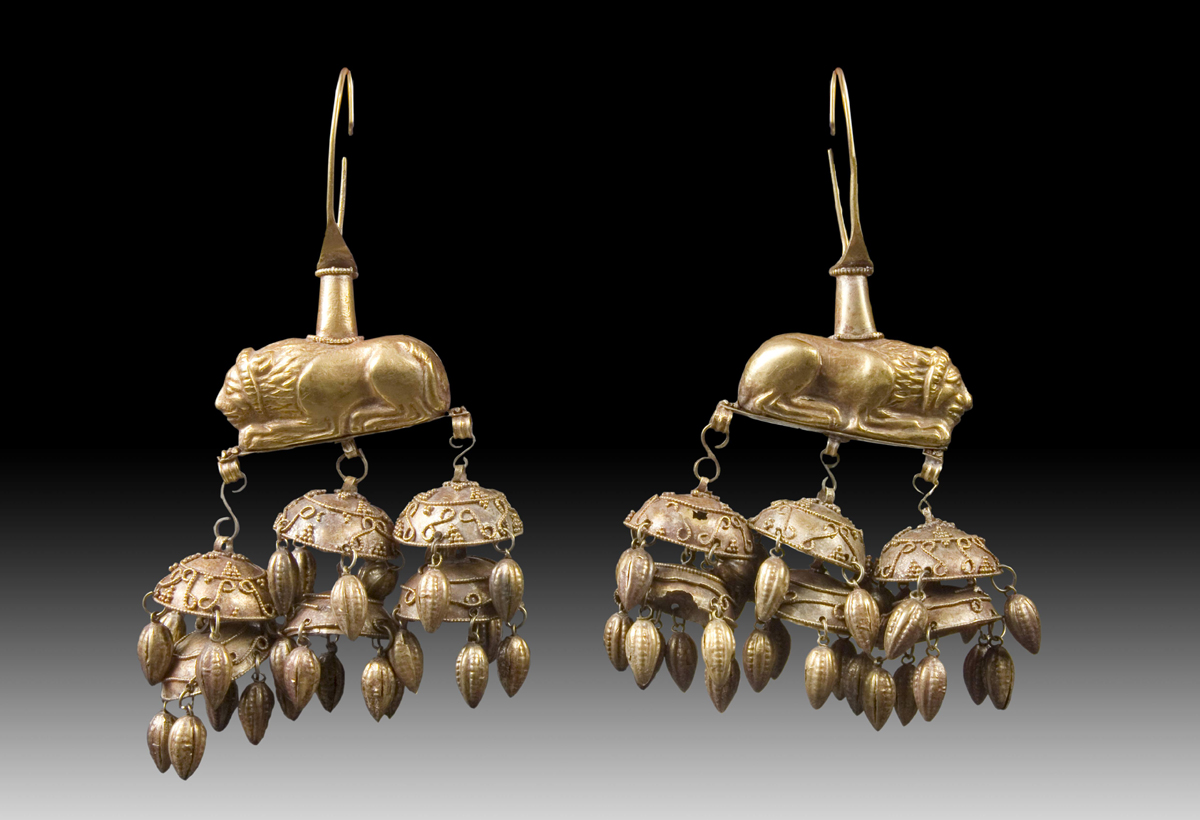 Each earring in this pair was suspended from a wire hoop with open ends; the hoop is flattened at the bottom where it is soldered to a short conical tube of sheet gold. The tube in turn is soldered to the back of a figure of a recumbent lion with its head on its outstretched paws. The lion elements were made in two halves, hammered in a matrix and soldered together. Six hemispherical caps, arranged in two rows and decorated with filigree and granulation, are attached by loops to the lower edges of each lion. Along their lower edges are hollow seed-like pendants, and like the lions are made in two halves and soldered together.

The ancestry for the construction of these earrings lies in the boat-shaped earrings with pendants in the form of one or more caps in horizontal rows with additional danglers along the edges; several of these have been found in archaic contexts in the North Caucasus. A boat-shaped earring with a hemispherical cap soldered below and pendants was found in the barrow no. 7 of the Nartan necropolis and dated tentatively to the second half of the 7th century BC.

However, although there is continuity in the construction into the fifth century BC, the overall shape of the earrings has changed and the central decorative element has taken on the form of a lion. The closest parallel for this can be seen on a famous gold comb from the royal Scythian burial in the Solokha barrow. It is decorated with five similar but cast lions forming a frieze between the upper figural panel and the teeth of the comb. The body and mane of the lions on the comb are treated in the same way, as on our earrings.

Five pendants in the shape of caps, similar to those of our earrings, decorated with triangles of granulation, with additional pendants were found in the burial of the barrow “Little Chertomlyk” dated to the second half of the 5th century BC. The closest parallels to the hollow seed-like pendants with vertical ribs with dotted pattern in relief are the pendants of the necklaces, dated to the second half of the 5th century BC, mostly to its last quarter, from the barrows of Nymphaion in the Eastern Crimea, as well as from Mikhailovo-Apostolovo and Yablonovka in the Dnieper basin. The hemispherical caps of our earrings are decorated with the compositions of filigree and granulation, including triangles of granulation and S-shaped filigree spirals – these decorative motifs are typical, for instance, for the boat-shaped earrings from the contemporary Scythian burials.

The construction of the earrings, together with the style of their elements, suggests a date in the second part of the fifth century BC. Because the earrings are unique it is difficult to define their centre of manufacture, but they may have been produced in one of the Greek North Pontic workshops, either in Olbia or in the Bosporan Kingdom.

Each of these earrings has been constructed from a large number of sheet, wire and grain components. The lion figures are made in two halves in sheet gold and have beaded wire applied to the front of their paws and along their tails. There is also beaded wire circling the top and bottom of each tapered cylindrical collar above the lions. The earrings are actually mirror images of each other – a sophisticated but common feature in many ancient earring types.

There are variations in the surface colour between the lions and the hemispherical pendants. However, close similarities in manufacture and in the use of beaded wire suggest that the parts do belong together and that the colour difference may be due to slight recent cleaning.