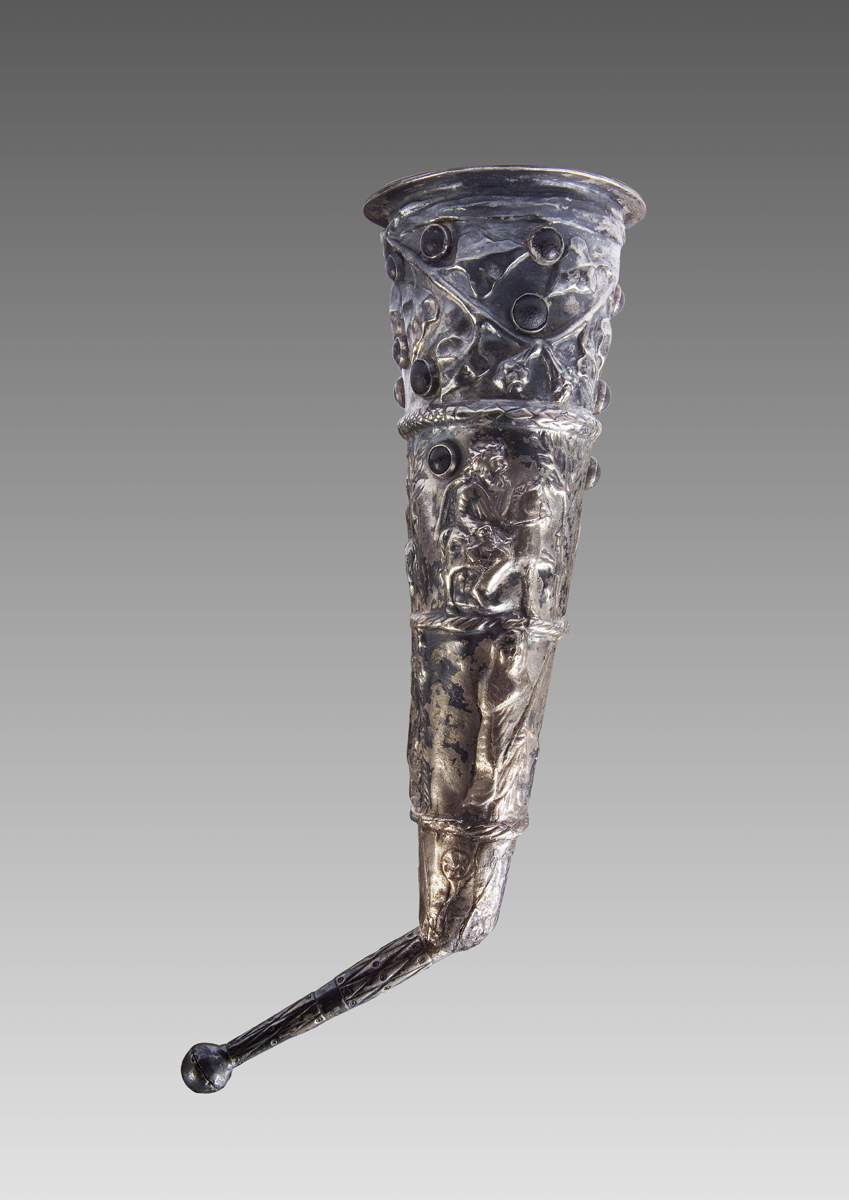 The rhyton has a conical body, a flat out-turned rim and a tubular spout with a ball-shaped terminal. The horn was made in two halves, each hammered over a relief matrix and then soldered together. A strip of metal is soldered to the out-turned rim. The spout is inserted at an acute angle into an opening in the lower part of the horn.

The horn is divided into four horizontal registers separated by narrow bands in high relief. The uppermost band is decorated as a stylized garland while the remaining two are ornamented with oblique notches. The upper register is decorated with a bound garland of ivy which weaves between applied cells filled with inlays of blue and red glass. The nest register bears a figural frieze which read as follows (from left to right, starting from the join): a tree with short branches with large leaves; a rider to the right; another tree; Athena moving to the left, wearing a Corinthian helmet, with an aegis on her breast and carrying a round shield and a spear; another tree; a rider moving to the left with the right hand stretched forward and upwards. The central lower register is also decorated with a figural frieze: a swathed female figure standing en face with a sceptre in the right hand; a male figure turned to the left wearing a Corinthian helmet and carrying a spear; a bearded male figure en face, in a chiton and hymation with a phiale in the right hand, leaning on a vertical staff. The lower register is decorated with elongated triangular leaves alternating with stemmed buds in relief stamped with heart-shaped petals.

The spout is decorated with two zones of elongated lozenges stamped with ring and dot motifs, separated by an undecorated band. The ball terminal is made in two halves which are soldered together. A band of punched rings and dots disguises the join.

This rhyton is the same type as cat. no. 21, where the bodies are made in two halves and the spout is inserted into the horn at an acute angle. Bronze matrices for such horns were found at the turn of the century in the vicinity of Tuapse on the eastern coast of the Black Sea; these are now kept in the Hermitage. While the style of the decoration suggests that the craftsman who made the matrices had a distant knowledge of the type of late Hellenistic ornament figured on objects of Parthian manufacture, its provincial presentation suggests that the matrices cannot have been made earlier than the 1st century AD. The decoration of the tube finds parallel on the tube of a silver-gilt rhyton of a similar construction with four decorative friezes on the horn, including the motifs, wide-spread in the art of the Roman Empire, such as amours carrying garlands, which was exhibited at the Christie’s in New York in 2003, as well as on our rhyton with battle scenes cat. no. 21.

A defining feature of this rhyton is the glass inlays in the upper two registers which are placed randomly, primarily in the upper field below the rim. Such inlaid cells were widely used on jewellery and vessels made of precious metals in the late Hellenistic period, as for example on the mounts and belt tabs from Zubov barrow no. 1 in the Kuban area. They were also employed in the 1st to 2nd centuries AD in the North Pontic area, and it seems possible that the matrices and the rhyton date to this period and were executed in a workshop located on the fringe of the Roman world. This is likely to have been one of the local workshops, whose products catered to the tastes of the barbarian populations of the foothills of the north-western Caucasus. The images of the deities represented on the rhyton are of considerable importance for understanding the culture and religious beliefs of the populations of this area.