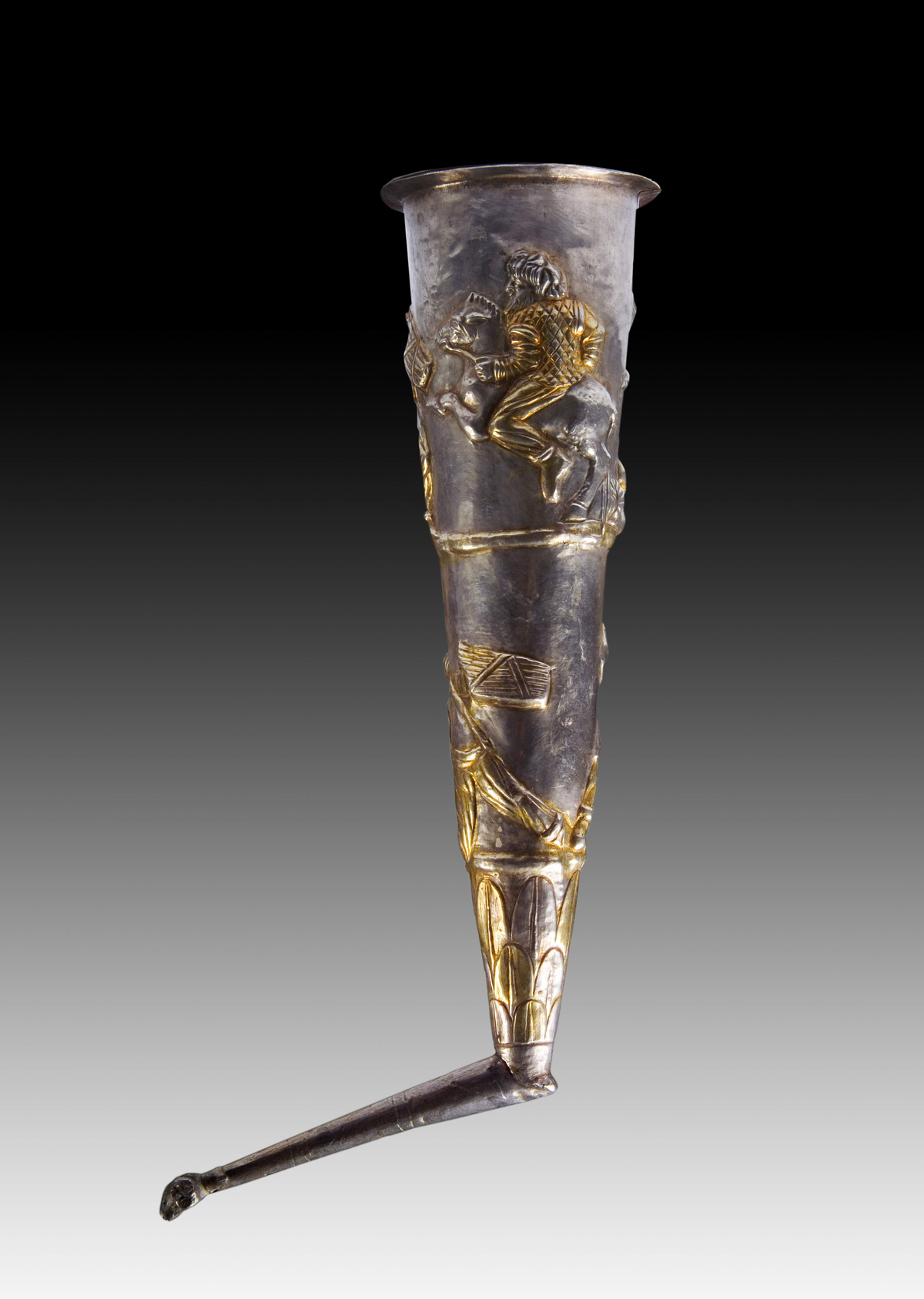 The rhyton is made of two curved sheets soldered together, a tube and a terminal in the form of a small ram's head. The horn is divided into three registers with parcel-gilt and repousse decoration; the upper two display combat scenes while the third frieze depicts feather pattern. The upper register shows a battle between a warrior on foot and a mounted warrior, who attacks him from the right. A second horseman follows, trampling a fallen warrior with a shield protecting his exposed torso. The horse's haunches almost touch the warrior on foot. The middle register shows a battle between two warriors on foot; one, with a wide open kaftan, holds his kneeling opponent with a shield in his hand by the hair. The lower register is filled with three rows of feathers which diminish in size towards the junction of the horn and the tube. Every second feather is gilt.

The construction of the rhyton indicates that it belongs to the class of drinking horns with the tube inserted into the body of the horn at an acute angle. The horn was made using relief bronze matrices and similar matrices, now in the Hermitage, were found near Tuapse c. 1900 (see cat. no. 19). The motifs represented on the bronze matrices from the vicinities of Tuapse, find parallels in the art of Late Antiquity. Silver rhyta of this type have never been found in archaeological excavations. Most known examples, including those published in the auctions catalogues, are held in private collections, although one fragmentary survived example with the representation of the scenes of the footed warriors fighting, was acquired by the Museum of Kutaisi as a chance find. The rhyton was before 1930 in the destroyed church in Gomi in the Mountainous Racha in the Northern-Western Georgia together with other archaeological objects, which were allegedly brought there and dedicated in the church by the local peasants (the practice well-known in the Caucasus). It could originate from the necropolis located near the neighbouring village of Brili.

Scenes of combat between a warrior on foot and a horseman shown on the upper frieze of our rhyton are widespread motifs in the Graeco-Persian glyptic of the 5th - 4th centuries BC, in the red-figured vase painting and on the items of toreutics of Graeco-Scythian style (cf. the scenes on the famous gold comb and the silver gorytos overlay from Solokha barrow). The image of a killed warrior lying on the ground is also known on the 4th century BC finds from the Kuban area, as appears on the “big” rhyton from Karagodeuashkh barrow, where it is shown along with the two horsemen figures on the main frieze. It is also shown on a gold open-worked plaque acquired in 1913 by the Belgian collector Adolphe Stocklet from the Rostov-on-Don collection of F. S. Romanovich, which originally probably came from the late 19th illegal excavations in the region of Zubov Farm in the Kuban basin.

The closest parallel to the kaftans of the warriors shown on both friezes is a kaftan represented in detail on a bronze statue of a Parthian ruler from Shami in Iran, which is recently dated from the 1st century BC to the 1st century AD. It not only has similar vertical folds, but is also opened loosely at the breast. The warriors’ close-shorn hair, shown on the rhyton, varies from the style of the Scythians in the metalwork of the Graeco-Scythian style; the latter are usually depicted with long hair, falling to the shoulders. The hair of the warriors shown on the rhyton is similar to those of the warriors, shown on the Romanovich plaque and of the horsemen represented on a silver phalera with hunting scenes from the Mzymta Treasure, found in the mid-1990s on the left bank of Mzymta river on the slope of the Big Caucasian ridge.

The motif of a warrior grasping his enemy's hair shown on the second freeze of our rhyton was widespread in Greek, Graeco-Persian and Graeco-Scythian art of the Classical period. Scenes on our rhyton derives typologically from the 4th century BC Graeco-Scythian art; found it best representation on the famous large gold conical object from Perederieva Barrow, with the armed warrior grasping the hair of the unarmed kneeling enemy. A comparable scene is also shown in the left side of the Romanovich plaque: a warrior with a sword, shown to the left, is pulling by hair his kneeling enemy. In a very similar way this motif presented on the few other rhytons of the group, even though our rhyton has it much better presentation from an artistic point of view and probably preceded the others. We come across images of footed warriors with a dagger or a sword, attacking the kneeling enemy and grasping his hair on a rhyton of a similar construction exhibited at Christie’s in New York in 2005. However, the closest parallels to the battle scenes on our rhyton appear on another silver rhyton of similar construction now in a private collection in Moscow.

On the latter rhyton the bearded warrior shown in the second register holds a sword with a straight, rectangular cross guard and ring shaped pommel. The latter is an important find in assembling a chronology of the period as it belongs to a type which was prevalent in the Northern Caucasus and the Kuban from the 1st century BC to the 2nd century AD. Shields similar to those shown on our rhyton and the Moscow rhyton are very different from the shields known in the Roman world and probably represented a local version of this armour which also can also be seen on a fragmentary silver rhyton from Gomi in Racha.

The tube of our rhyton is decorated similarly to that of the rhyton with glass inlays cat. no. 19. Terminals in the form of large ram’s heads were used in the North Pontic rhyta, dated to the 5th – 4th centuries BC. In contrast to the terminal of these rhyta from the early Maiotian and Scythian complexes, the terminal of the rhyton discussed is proportionally much smaller and shown in a rather schematic way.

The similarities between this rhyton and the Moscow example, particularly the sword and details of costume, as well as the close parallels in the costume on the statue from Shami, allows to suggest that our rhyton can be dated from the 1st century BC to the 2nd century AD. The association of these rhyta with the matrices found near Tuapse and the rhyton from Gomi in Racha defines the possible area of their manufacture and distribution. All are characterised by an individual local style which shows the influence of Graeco-Scythian art together with Parthian art of the Late Hellenistic period. From an historical point of view this rhyton is one of the most interesting in the group and provides unique information about the costume, arms and armour of the population of this region.