Skyphos with scenes from the Trojan cycle 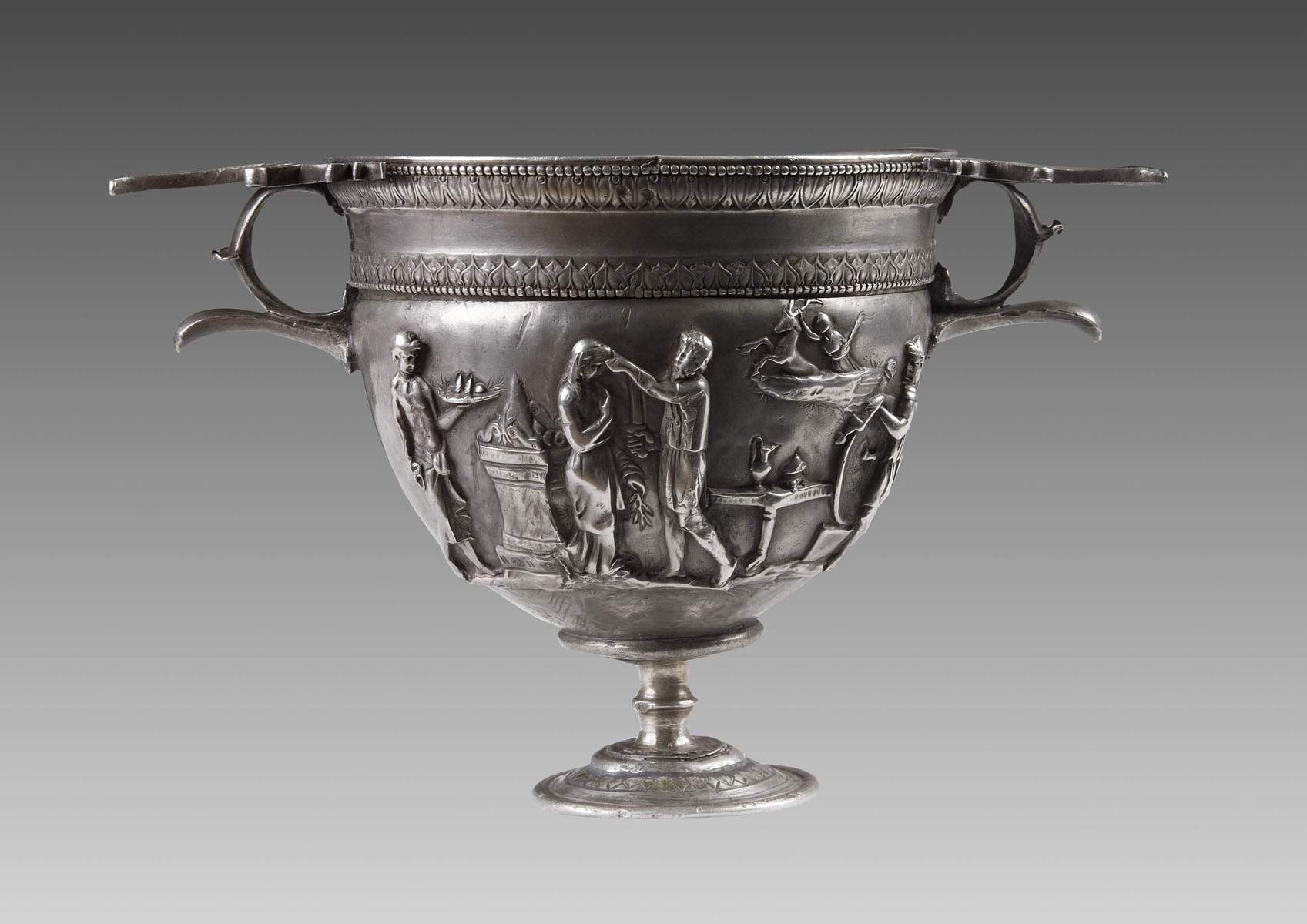 The double-shelled cup stands on a baluster stem with a chased and gilded foot. It was assembled from separate parts, including an outer repoussé case and a plain inner lining, the foot and the two sections of the handles. Two decorative bands of oval and dart mouldings (kyma and kyma reversa), set off by beading, are chased around the upper portion of the cup; some traces of gilding survive in these areas. The handles were each assembled of three sections: the ring handles have additional finger rests at the bottom and the plain flat handles have openwork scrolls and tendrils to either side. The body of the cup is decorated in relief with figured scenes. The cup depicts nine mythological figures in high relief repoussé. Inscriptions in pointillé Greek are found above each figure.

The primary side (side A) depicts the sacrifice of Iphigenia, the daughter of King Agamemnon, retold by the fifth-century poet Euripides in his play Iphigeneia in Aulis, one of the most compelling of the Troy legends. According to the legend, Agamemnon, King of Mycenae, assembled his troops at Aulis before the Greek invasion of Troy. While hunting there, in a grove sacred to Artemis, he killed a stag, which so angered the goddess that she stopped the winds, thus preventing the departure of Agamemnon’s army. The seer Kalchas was consulted, and informed the Greeks that Artemis could only be appeased by the sacrifice of Agamemnon’s youngest daughter, Iphigenia. Iphigenia stands before a fire altar, holding a branch in her right hand. The male figure standing before her grasps her hair with one hand and brandishes a short sword with the other; this may be Kalchas, or her executioner. A low table set with a ewer and turibulum stands behind. In the sky above Artemis descends in a cloud, holding a torch and grasping the horns of a deer galloping before her. The bearded figure below holds a decorated shield and sword. To the left of the fire altar a servant approaches with a libation ewer and tray piled with fruits.

The other side (side B) shows a bearded figure seated on a stool beneath a tree; he is flanked by two cloaked figures holding spears; one holds a short sword and the other a shield. At the end of this sequence another bearded figure holding a sword stands against a pillar topped by a siren. This side is less easily identified but seems most likely to be the story of Philoktetes on Lemnos. Philoktetes owned the famous bow and quiver of Herakles, and was visited by the Greek heroes fighting at Troy lead by Odysseus, Diomedes and Neoptolemos. Thus the seated bearded figure may be that of Philoktetes, the warrior to the right Odysseus, and the youth to the left Diomedes or Neoptolemos.

The cup is a footed ovoid skyphos, a type of drinking cup popular in the 1st century BC – 1st century AD. The peculiarities of the shape of the cup and especially the characteristic details of decoration on its handles bespeak a dating in the second half of the 1st century BC, rather than in the 1st century AD. A detailed study of the piece and the palaeography of the inscriptions allow us to suggest a more precise date and to attribute it to a particular centre of manufacture. At this stage, I would suggest it is more likely to be of Asia Minor or Eastern Mediterranean manufacture than Italic. Being in such excellent condition, the cup discussed is one of the finest examples of silverware with figural scenes of the late Hellenistic and early Imperial periods. Although stories from the Trojan cycle can be identified on the imagery of the group of silverware of the so-called Julio-Claudian type, the motifs represented on our cup are unknown among them. The only example of a similar subject on a metal vessel appears on a late 1st to early 2nd century AD bronze pitcher, found in a Sarmatian burial in the Rostov-on-Don area.

There are grounds to suggest that the piece may have been found in the region of the northern shores of the Black Sea, an area with which the Iphigenia legend had close associations. One version of the myth claims that at the last minute Artemis changed her mind, substituted a stag for a maiden, and whisked her away to Tauris. This variation of the myth was known to the poet Hesiod, and existed among the Greek colonists in the North Pontic area until the mid-5th century BC, when it was transcribed by the historian Herodotus (IV, 103) in the passage about the sacrificing of the foreigners by the Taurians: the goddess whom they sacrifice their victims is the daughter of Agamemnon, Iphigenia. As a goddess, Iphigenia inhabited the land of the Taurians, located in the southern coast of the Crimea. This sprawling land was well-known to Greek sailors for the sacrifice of foreigners to their goddess, resulting in the mythological belief of the Greeks in the transposition of Iphigenia to Tauris after her father sent her to a fire altar. In the Euripides play “Iphigenia in Tauris”, we first meet Iphigenia in Tauris not as a goddess, but continuing her mortal existence as a priestess in the sanctuary of Artemis in the land of the Taurians.

This skyphos, in excellent condition, is one of the finest surviving examples of silverware with figural scenes from the late Hellenistic and early Imperial periods.