Rhyton mounts with griffin figures and a horse terminal 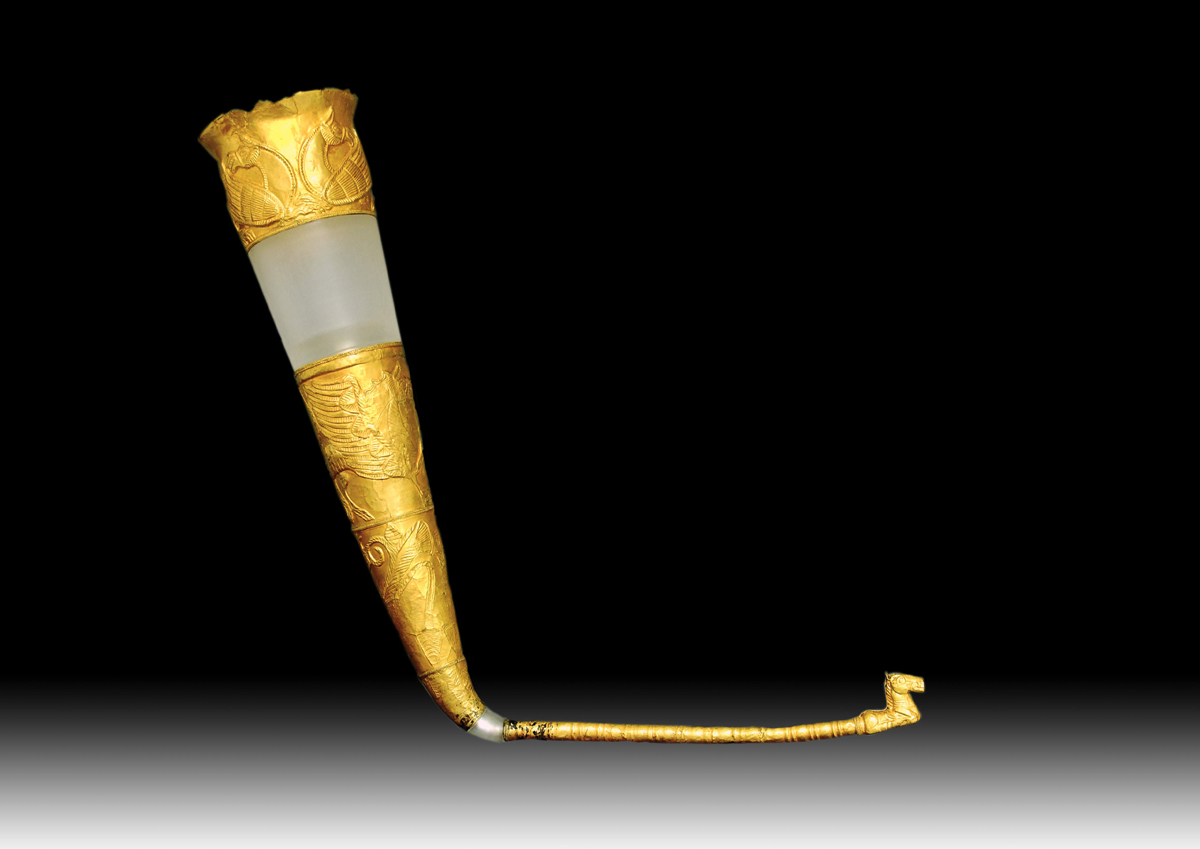 The rhyton consists of sheet gold overlays of the upper part of the horn, its mid section, composed of three bands, and a tube with a terminal in the form of a sculpted horse.

The upper section consists of a sheet of gold fashioned into a cylinder with an out-turned rim which would have been folded over the original material of the rhyton, presumably of animal horn. The section is worked with three recumbent griffins in relief set head to head, tail to tail and head to tail. All have twisted tails and large feet with three notched talons or claws. The facing pair, seated with their front paws overlapping, resembles a heraldic device. The bottom is finished with two rows of twisted wires set side by side to imitate braiding within plain wires.

The casing for the middle section of the horn is divided into three sections with the top edges and the two joins hidden by faux braided wire between plain wires. The upper register repeats the griffin motif in lower relief and in a slightly different style. Here two standing griffins face one another to either side of the seam; their forelegs are raised and touching. The next section depicts a stylised vegetal calyx from which spring three ribbed stems, two with closed buds and one with an open palmette blossom. The lowest section bears rows of highly stylised ribbed leaves or feathers.

The tube with the horse protome is made from a single gold sheet, rolled into a slightly tapering tube. The ends of the tube are decorated with braided wires. The terminal was made in two sections, probably worked over a mould, and takes the form of a recumbent horse with separately made triangular ears. A decorative band of a pair of twisted wire ropes conceals the join.

No intact examples of rhyta with long tubes with animal terminals have ever been recorded. Though similar separately found mounts, tubes and the terminals are known, these are all individual finds separated from their original horns. Various elements of fabrication of the mounts – the technique of soldering the ends of the bands, the folded vertical seams and the decoration of the joins with braided wires – allow us to compare our rhyton to the gold mounts of rhyta found in burial complexes of the late 2nd to early 1st century BC in the Kuban basin. One of them found in the barrows near the village of Merdzhany in the vicinities of Anapa shows the figures of the horseman and the seated goddess; the other found near stanitsa Severskaya – the antithetic griffins. It is very plausible that these fragmentary preserved mounts also belonged to the same type of rhyta.

In 1912 the Royal Archaeological Commision acquired gold objects allegedly found in Ust-Labinskaya stanitsa in the Kuban area, including the fragmentary preserved gold rhyta mounts, one of them with images of the antithetic griffins, together with two horse terminals with pendants. Although most recently these objects from Ust’-Labinskaya were considered as fakes (without detailed analysis!), there are strong grounds to discuss them as authentic. Another group of the long tubes with different animals’ terminals including one with the horse figure was found in the late 19th century supposedly at Zubov Farmstead near Tenginskaya stanitsa, bought by Fedor Romanovich and in 1913 acquired by Adolphe Stocklet.

Images of antithetic griffins with crests, in poses, similar to those shown in the upper band of the mid-section of the rhyton discussed, are represented on the 2nd century BC goldwork from the Kuban area: on an open-worked conical overlay from the barrow near stanitsa Besleneevskaya, which is considered to be an example of local workmanship executed in the traditions of Hellenistic toreutics; and on the terminals of the torc from the barrow near stanitsa Staronizhnesteblievskaya. In the burial of the barrow no. 3 near Boiko-Ponura Farmsteаd there were found two series of gold appliqués, which, being sewn on the clothes formed the rows with compositions of antithetic griffins.

Floral motifs in the lower bands of the mid-section, given their level of stylisation of Hellenistic floral patterns, remind the treatment of floral patterns on the phalera from the barrow near Severskaya. The treatment of the sprouts of the floral pattern with parallel notches on our rhyton finds is comparable with that of the tree trunk on the rhyton from Merdzhany. The concept of the floral decoration on the bottom part of the rhyton probably derives from the Late Hellenistic silver-gilt Parthian rhyta (cf. cat. no. 14).

Of special interest is the terminal in the form of the hollow sculpted figure of recumbent horse with folded legs. It may be compared not only with the horse terminals from Ust’-Labinskaya and that from the former Fedor Romanovich collection. Both stylistically and constructively they find similarities with a local Kuban series of earrings in the form of recumbent ram figures dated to the 2nd century BC. An extremely rarity of such earrings in other regions of the North Pontic area and comparatively narrow chronological frame of the complexes in which they were found give the grounds to suggest that the workshop manufactured these earrings has been located in this time in the Kuban area.

The type of the rhyta with complete gold overlays and long tubes with the small terminals in a shape of a horse figures, manufactured in the 2nd century BC, derives from articles of Scythian metalworking in the Kuban area of the 4th century BC, which usually had single gold mounts with griffon figures and shorter tubes with the lion heads (see catalogue no. 8). A series of parallels between images on the friezes of our rhyton and on the objects of gold work from Kuban area of the 2nd– early 1st century BC as well as the provenance of the other rhyta fragments found in the late 19th – early 20th century allows suggesting that our piece was also made in one of the manufacturing centres in the Kuban basin in the same period. The rhyton itself is evidently a local shape, although a familiarity of its craftsmen with the ornamental decoration of the Parthian silver rhyta is still distinguishable.

The piece is notable not only for its artistic qualities but also for the completeness of its preservation, which allows us for the first time to reconstruct these ritual Kuban vessels of the late Hellenistic period.

The upper section consists of a lightly tapering sheet gold tube flaring towards an upper rim which is folded over to accommodate a horn or horn-shaped inner liner. The three recumbent winged griffins ornamenting the sheet gold were worked by hand before the sheet was bent into its truncated conical form. They have been worked by a combination of work from behind the sheet – raising the main figural components – and finer work with smaller tools from the front to add the details. The soldered vertical seam is possibly a folded seam; this would have helped hold the seam closed during soldering. The decoration on the mid-section is divided into three bands; it is made and embossed in a similar manner to the upper section, although the narrow lowest band is separately made and soldered to the section above. The top edge and the bands of decoration are delineated with borders of plain and twisted wires.

The terminal consists of a long and slightly tapering beaded tube ending in a horse; in total it is almost 20 cm long. The figure is made in two halves in sheet gold with the ears separately made and inserted into the tope of the head. The decorative band forming the mane of the horse and the band that conceals the join between the horse and the spout are similar to those on the mid-section of the rhyton. The terminal is made from one piece of sheet gold, rolled into a slightly tapering tube with a soldered seam underneath and it is possible that the corrugations were formed before the gold was bent into the tube.

The various parts of the rhyton show the stress corrosion, cracking and fractures consistent with great age and long burial. The fragile nature of the object has meant that some simple repairs and reinforcing have been necessary in modern times.